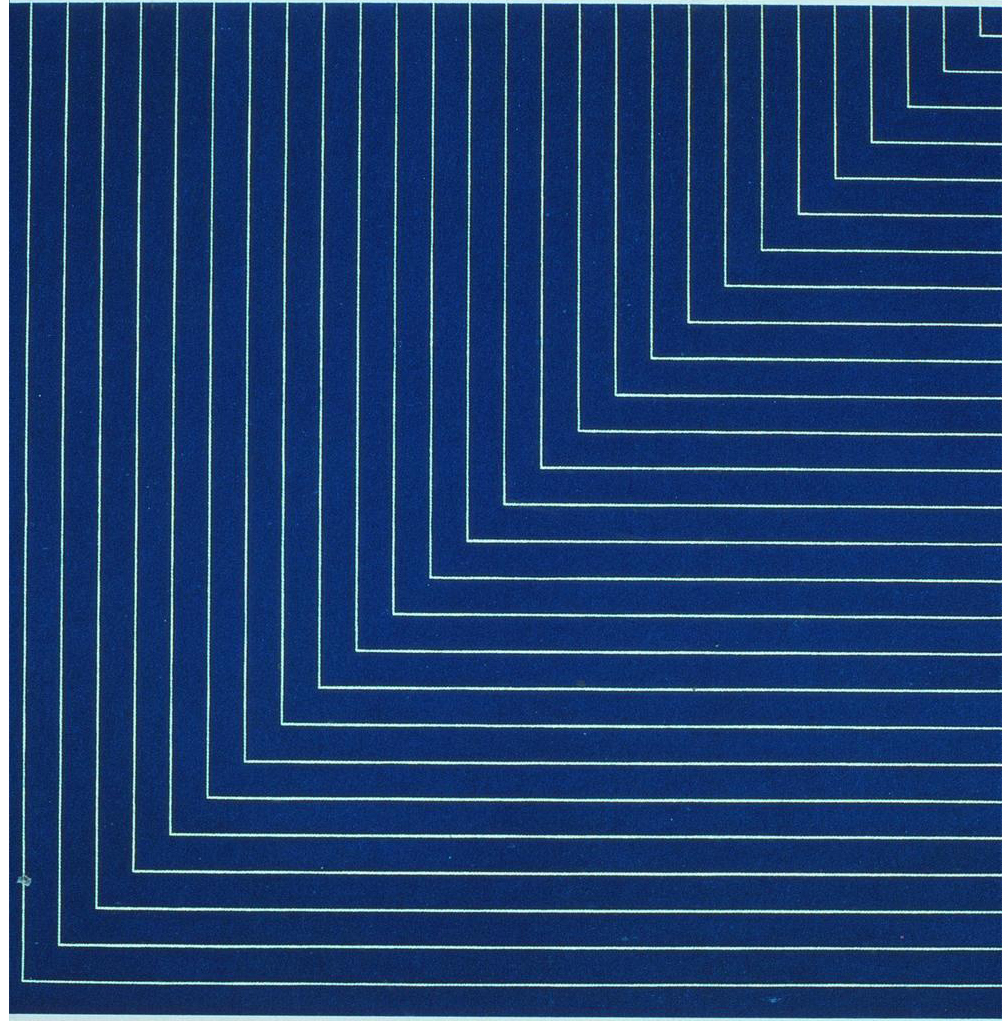 Here is a painting by Frank Stella. Monochrome, matte, and rigorously metered, the composition consists of nested bands cascading across the surface of the canvas. Each band, separated from the next by a narrow unpainted gap, replicates two of the canvas edges, resolving in the shape of its own frame in the upper right corner. 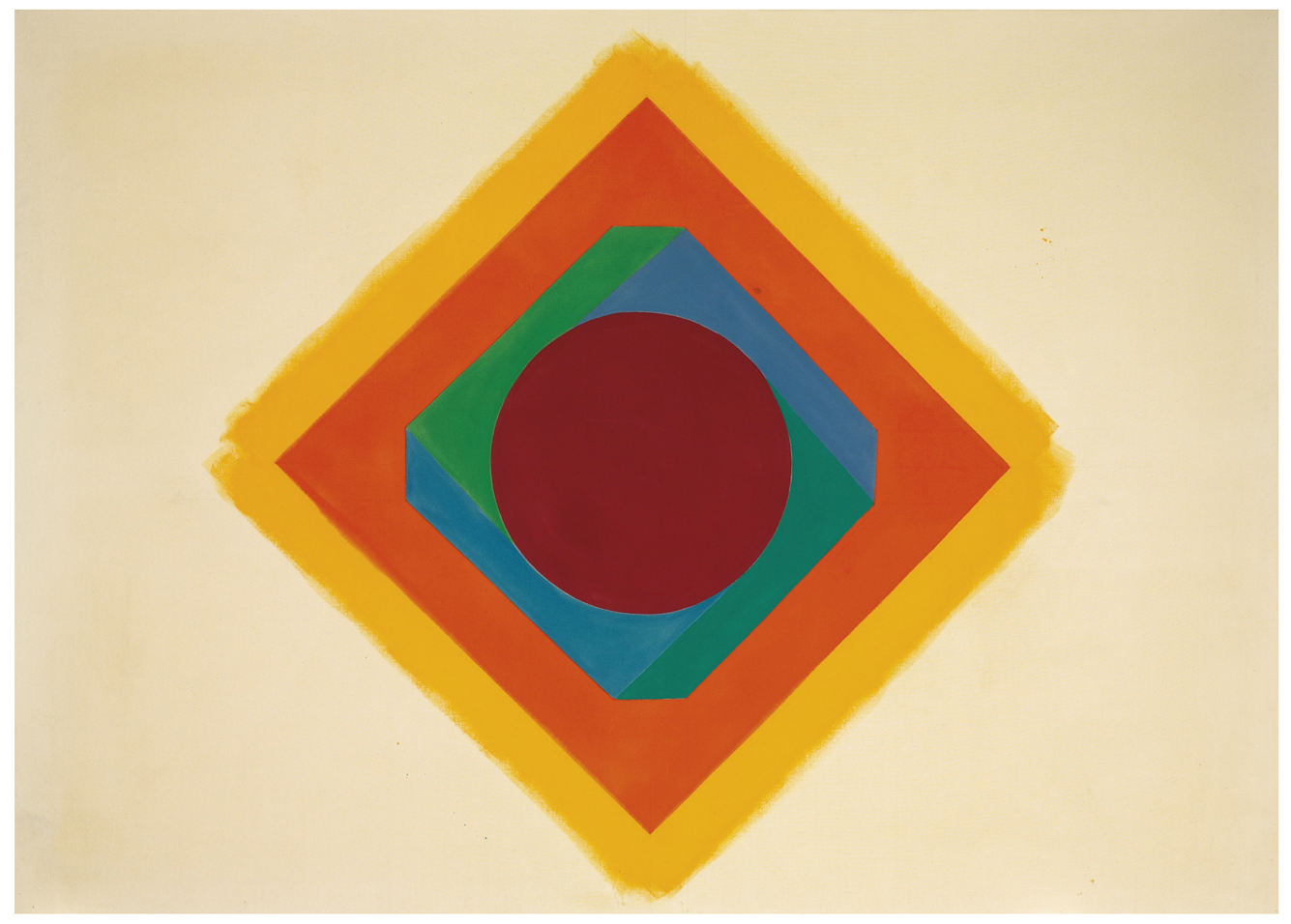 Both paintings are derived from gridded space—which is not to say that they portray grids, but rather that they come from the flattened, geometricized, structured, and anti-mimetic space of modernist painting. As such, they draw from the duplicity inherent in painted grids, whereby the frame is set into tension by the grid’s geometric implication of infinity. Stella exerts pressure past the edge of the painting. One imagines the cascading bands extending limitlessly, or wrapping up and around to enclose the square in the corner, replicating it outward in endless offsets. The painting is a fragment of cartesian infinity. Noland, on the other hand, exerts pressure between painted figures. The diamond, the circle, and the canvas itself reverberate against each other, producing tension internal to the painting, forgetting the space beyond the frame. These paintings present the possibility of simultaneity in pictorial space. Both material and immaterial, either inward or outward facing, they accommodate tension and contradiction. For this reason, the painted grid is “cheerfully schizophrenic,” [1] and not only for its spatial duplicity, but also for its ability to bestride matter and spirit. For despite the grid’s ability to bring physical and aesthetic qualities into unity onto a single material plane, “Mondrian and Malevich are not discussing canvas or pigment or graphite or any other form of matter. They are talking about Being or Mind or Spirit. From their point of view, the grid is a staircase to the Universal.” [2] Modernist painting produces idealized and efficient form by which the material of the canvas can be both addressed and transcended with radical simplicity of form and color. We gain an efficient way of producing tension and of presenting the possibility of beauty. For the art historian Michael Fried, the tension between Stella and Noland is a matter of shape as such, where the shape of the canvas itself is called literal shape and the figure painted on the surface of the canvas is called depicted shape. [3] The painted figure, rather than conjuring the space beyond the frame or the Spirit beyond the Matter, either follows or fights the frame of the painting itself. Here are the plans of our house:

An initial reading of the plan shows the architecture exploiting the tension between literal and depicted shapes. If the literal shape in painting is the canvas and if the canvas is the field of action, then in architecture our literal shape is the outline of the floor plate (the edge as figure), across or against which depicted shapes (form as figure) are laid out. Here, forms either follow or fight the edge. Here, on the ground which is our canvas, both space and human activity are organized. In our upper plan, the formal logic is governed, as in Stella, by the literal shape, whereby L-shaped bands replicate the edge of the square floor plate. In contrast, the lower level shows a depicted shape operating as a distinct pictorial entity, exerting pressure on the edge that contains it. The third and lowest level of the plan has two forms which play against one another without frame to mediate a relationship. The three plans of the house exploit and foreground the tension between edge and form. However, in architecture, a tension between edge and form drawn in plan will not produce a depicted shape in three-dimensional space, for architecture lacks a representational plane. Both edge and form must be materialized. Once made into architecture, both literal and depicted shapes become form, equal in potency, playing out their tensions across inhabitable, three-dimensional space. Thus the spatial cues taken from Stella and Noland culminate not in a dialectic between the material and the immaterial, or the physical and the represented, but rather in resulting spatial qualities that are simply presented in space, divorced from their own re-presentation. Built architectural form is thus split between two modes of perception: concentrated observation or habitual use.

Walter Benjamin would have us weigh these two forms of perception equally. He argues that habitual use, or perception in a state of distraction, allows for a new kind of perception that is just as canonical as concentrated observation (the mode traditionally aspired to by art), for once we perceive in a state of distraction, perception has become habitual, testing “the possibility of new tasks of apperception.” [4]. Habit begets perception, but what we learn from architecturalizing depicted and literal shape is that habit also begets form. Architecture cannot be purely aesthetic, which we claim not in defense of function, but rather in observation of programmatic form. Our L-shaped bands and our diamond figure, the driving forms of our spatial logic, consist of domestic infrastructure. On the upper level, the outer edge, the geometric headspring of the spatial organization, comprises the kitchen and bathroom.

On the lower level, the center diamond, our ‘depicted shape,’ not only houses laundry and bathrooms, but was born of the necessity to separate space in order to create private bedrooms. 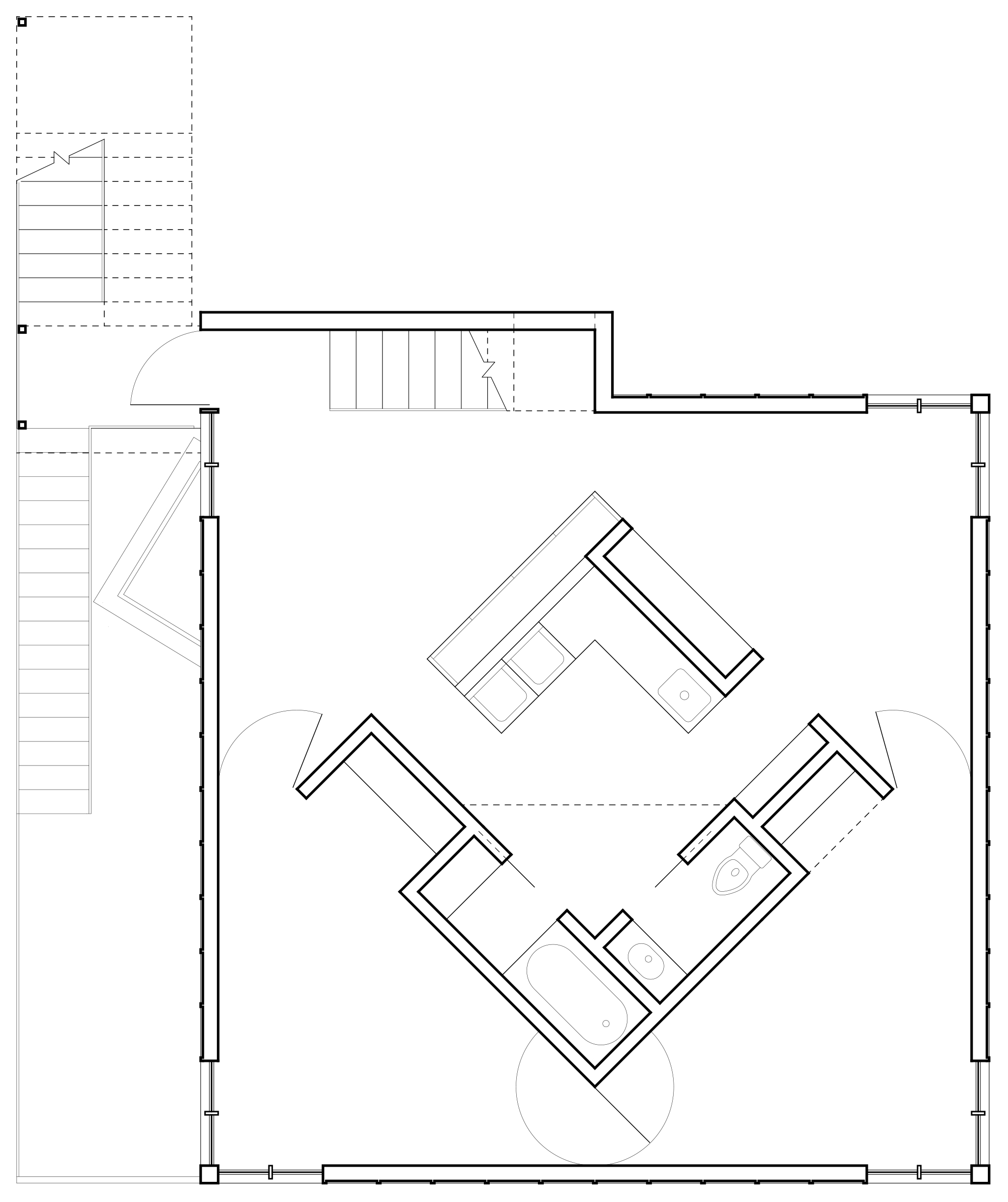 These forms are an infrastructural poché designed for the domestic laborer. They provide work surfaces, house machines, and orchestrate the maintenance and cleansing of the body, the reproduction of life. This is not form for the sake of form. This is not a pattern of use overlaid onto an aesthetic goal. Rather, ideal form and ideal use are one and the same: coextensive. Just as the aesthetic plane of a painting, through the depiction of a grid, becomes one with its own physical surface, so the tension between literal and depicted shape, through the architecturalization of drawn figure, becomes one with the form of habitual use. Our two modes of perception—concentrated and habitual—are simply two ways to see the same form. This house exists in tension—tension with the history of architecture and the critique of painting, tension between drawings and construction, program and domesticity, ideal form and ideal use. And yet, the tension is not resolved. Rather, the tension is brought to a perfect pitch, where opposing forces are both equal and opposite. The optically-perceived form—the heavy diamond in the center of the space, the rigidity of a rigorous banded logic—exerts upon the habitual a pressure to be made known. And so idealized form coerces a potential for habits to be re-examined. There is something to be said about the value of the struggle between other-wordiness and the reality of the physiopolitical world. But the precise implication on domesticity is yet unknown and it interests us to present it as such. Yet although unknown, an implication is undoubtedly there, as we have taken the hand of form. This in itself is most potent. It is enough that the habit (however subtle) is broken. It is enough to infringe upon exiting patterns of use, to nudge us out of distraction and provide passage between opposite modes of perception. One need not forecast future uses of space. Instead, use, program, habit—automatically placed under the auspices of architecture—are re-thought, re-invented from the rigor of form. But ultimately, this project is not a puzzle to be solved. Like a Stella painting or a Noland, it is there. It is sensual. It vibrates with tension, allowing room for the unimagined. It is both Matter and Mind. It exists, and is hopefully beautiful by way of design, as modes of perception are mirrored, materialized, and in themselves perceived.

[1] Rosalind Krauss, The Originality of the Avant-Garde and Other Modernist Myths (Cambridge: MIT Press, 1985), 18.

[2] Rosalind Krauss, The Originality of the Avant-Garde and Other Modernist Myths (Cambridge: MIT Press, 1985), 10.

[4] Walter Benjamin, The Work of Art in the Age of Its Technological Reproducibility and Other Writings on Media (Cambridge: Belknap Press of Harvard University Press, 2008), 39-41. 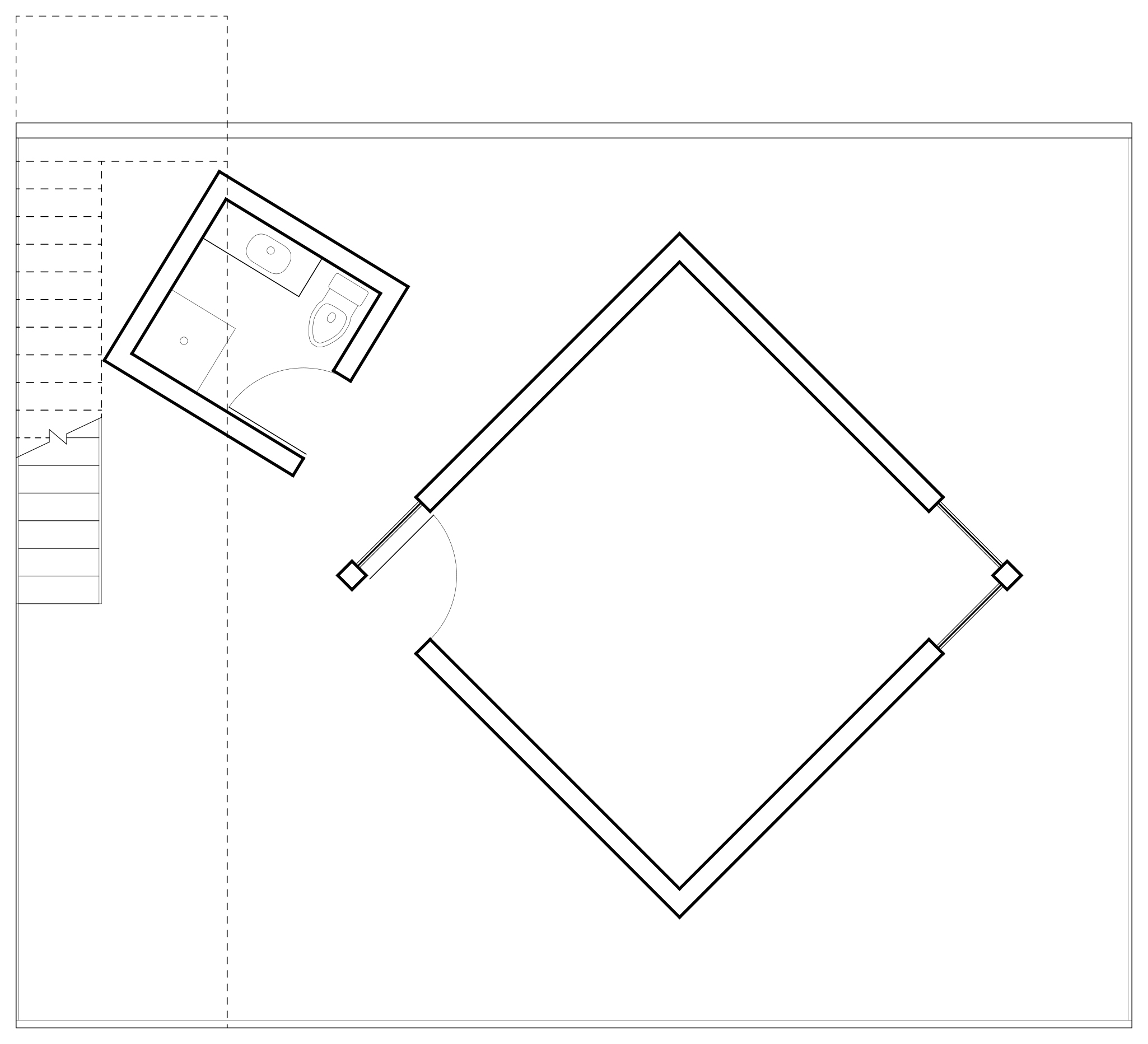 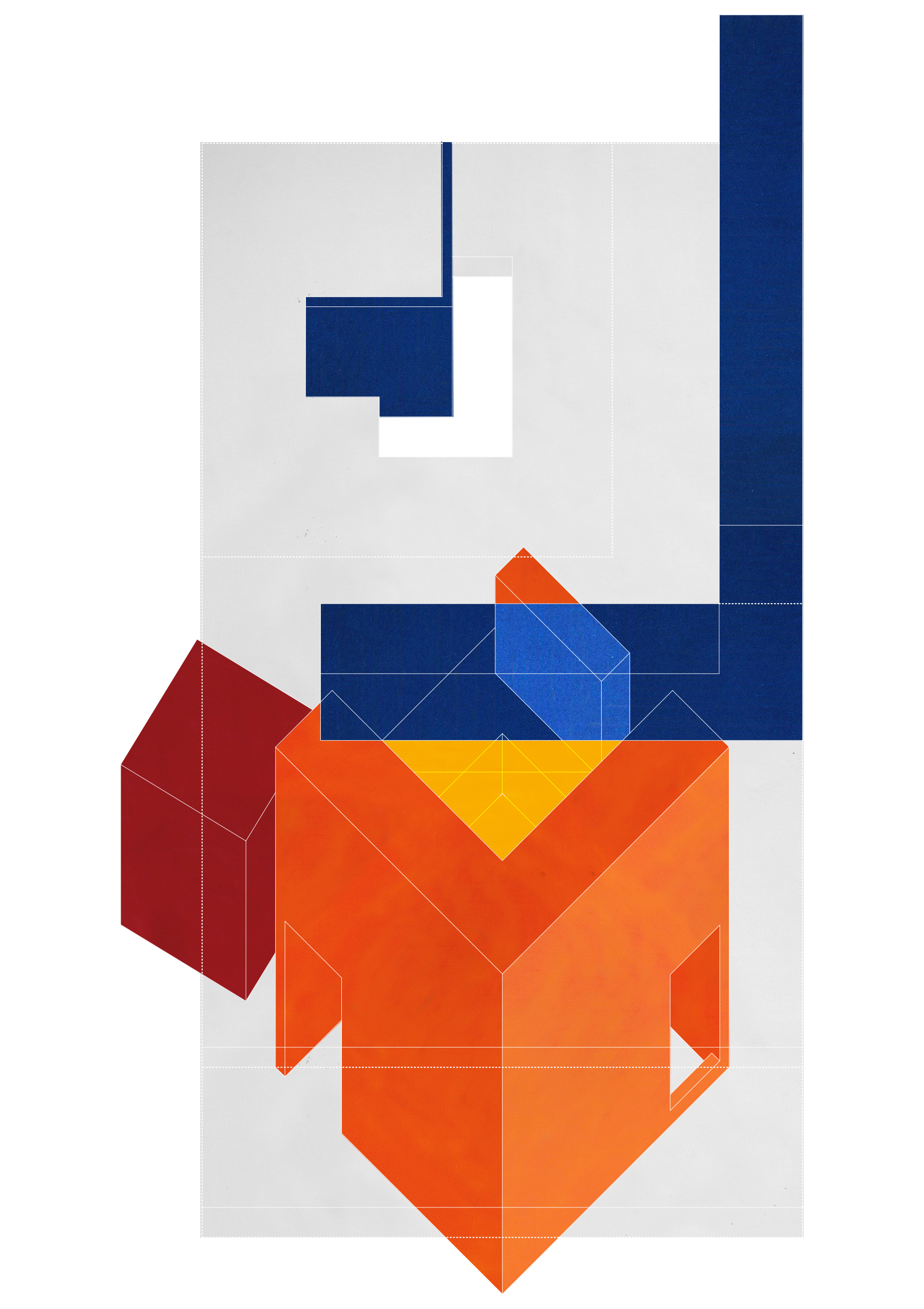 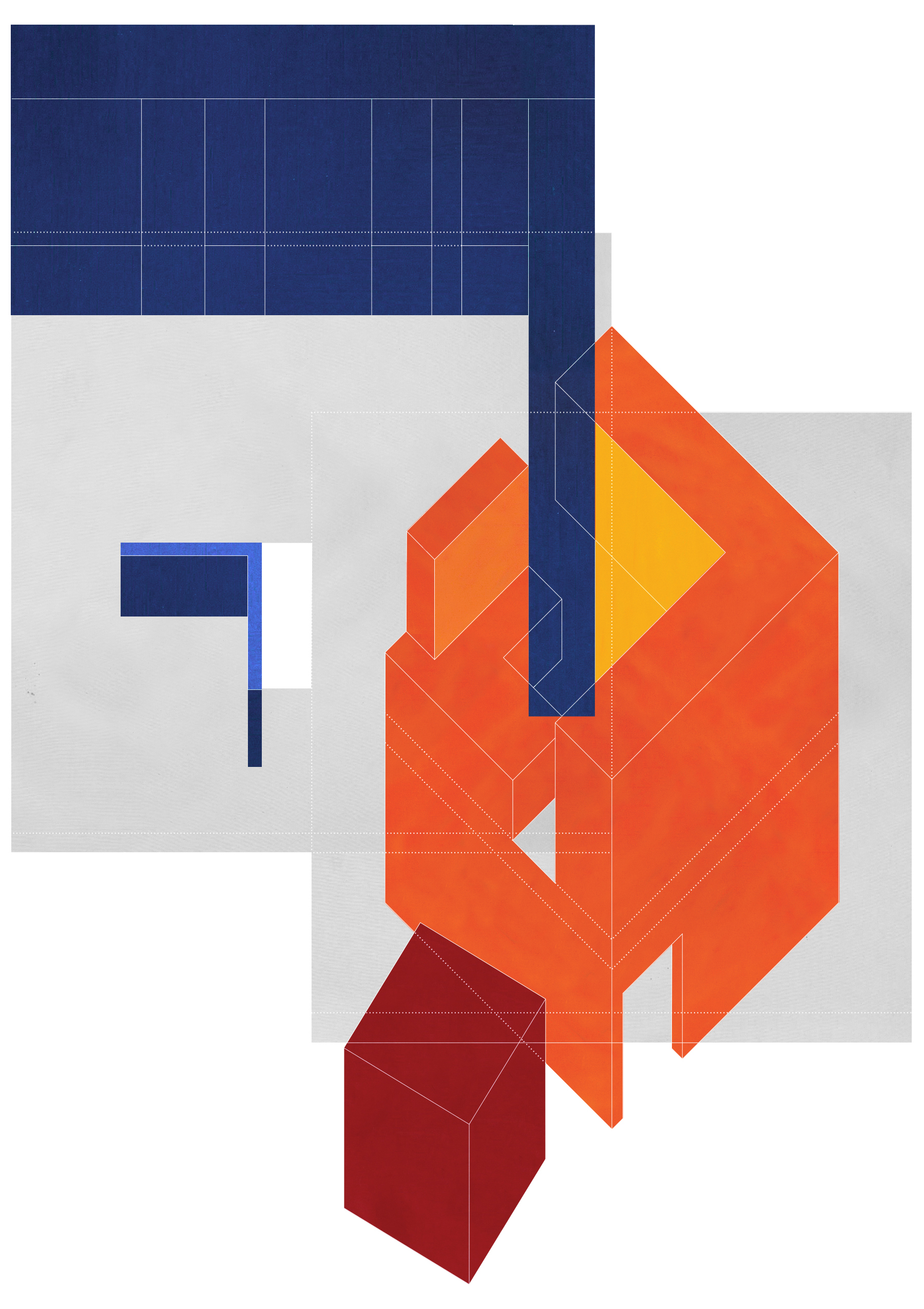